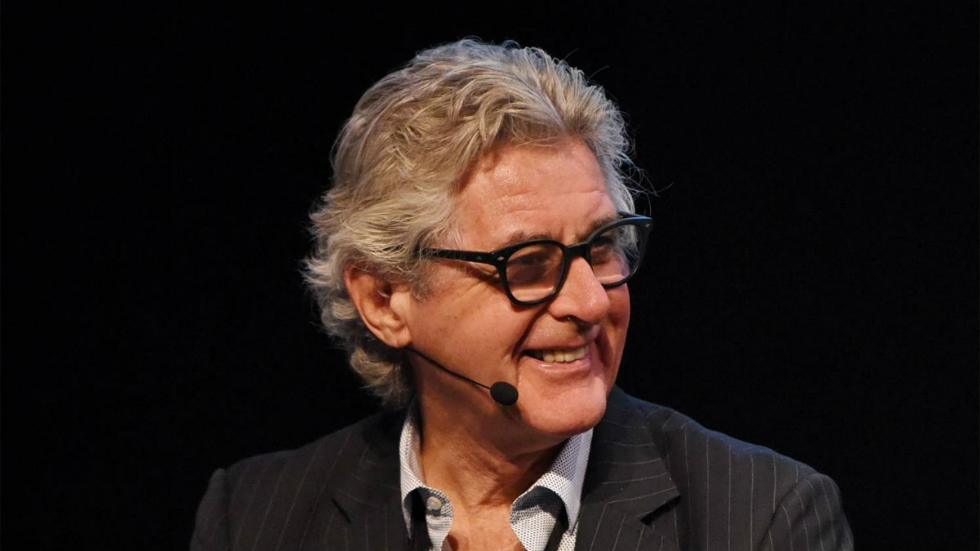 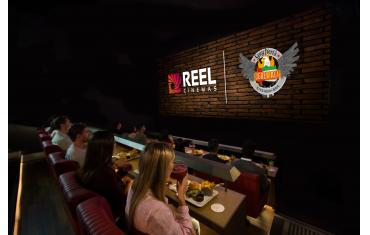 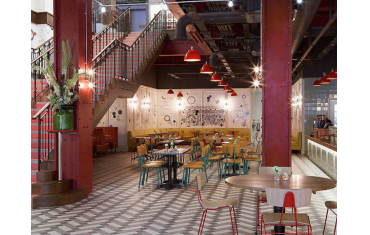 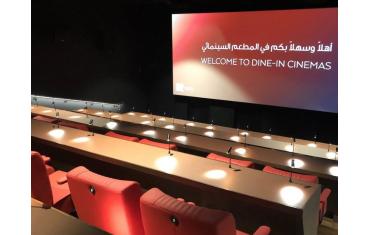 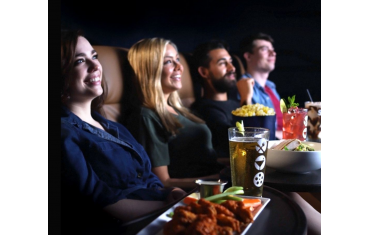 A Global Perspective: The Past, The Present, The Future

Laura Peralta-Jones of LPJ Productions interviews John Sullivan, Co-Founder of The Big Picture and The Light Cinemas, who along with his teams, have been instrumental in successfully redefining and shaping the cinema footprint in urban development projects across the United Kingdom, Europe and the Middle East.

Defining the 21st century cinema landscape could best be described as 'extravagant' with sophisticated multidimensional technologies, luxe seats, giant screens, giant sound and giant concessions!  Whether part of a large master-planned environment or stand-alone attraction, the movie-going experience has evolved into a location-based entertainment culture – where going to the cinema can offer everything from gourmet in-seat dining, VIP screening rooms, sports bars, bowling lanes, gaming arcades, major food brands to gala-themed movie premieres and it appears this is only the beginning of more to come.  Combining all these exclusive cinema features, it laid the red-carpet for live events and community revelries with the feel of Hollywood savoir-affair – and that's entertainment!

As we began to explore the journey of cinema's ever-changing guest experience and the creative vision it takes to align commercial advantage with societal interests, we sat down with one of the industry's leading international development experts, John Sullivan, Founding Director of The Big Picture Group and The Light Cinemas, who along with his teams, have been instrumental in successfully redefining and shaping the cinema footprint in urban development projects across the United Kingdom, Europe and the Middle East.  Working with Saudi Arabia's retail mogul Fawaz Alkohair Group to create the MUVI cinema brand into FAHG's Arabian Centres Malls across the region, they debuted their first state-of-the-art locations in Jeddah, Riyadh and Dammam and have an ambitious roll-out planned for 12 more locations.

Spanning the continents, from the Middle East, Asia, Europe, and the US and beyond, we're watching multi-billion dollar projects green-lit for full-scale destination entertainment realms, intended to build and repurpose entertainment economies, while enriching people's lives -- and every detail contributes to a global experience.

The most common shared event for any out-of-home experience is food and dining, and in a world where culinary cuisine has become artistry, performance and mouthwatering pleasures, master and sous chefs alike are discovering ways to marry cinemas into screening premieres to further heighten exhibition.  Getting comfortable in our gold standard seats, time to hear the insights on the rise of food, event entertainment and cinema's social commitment. 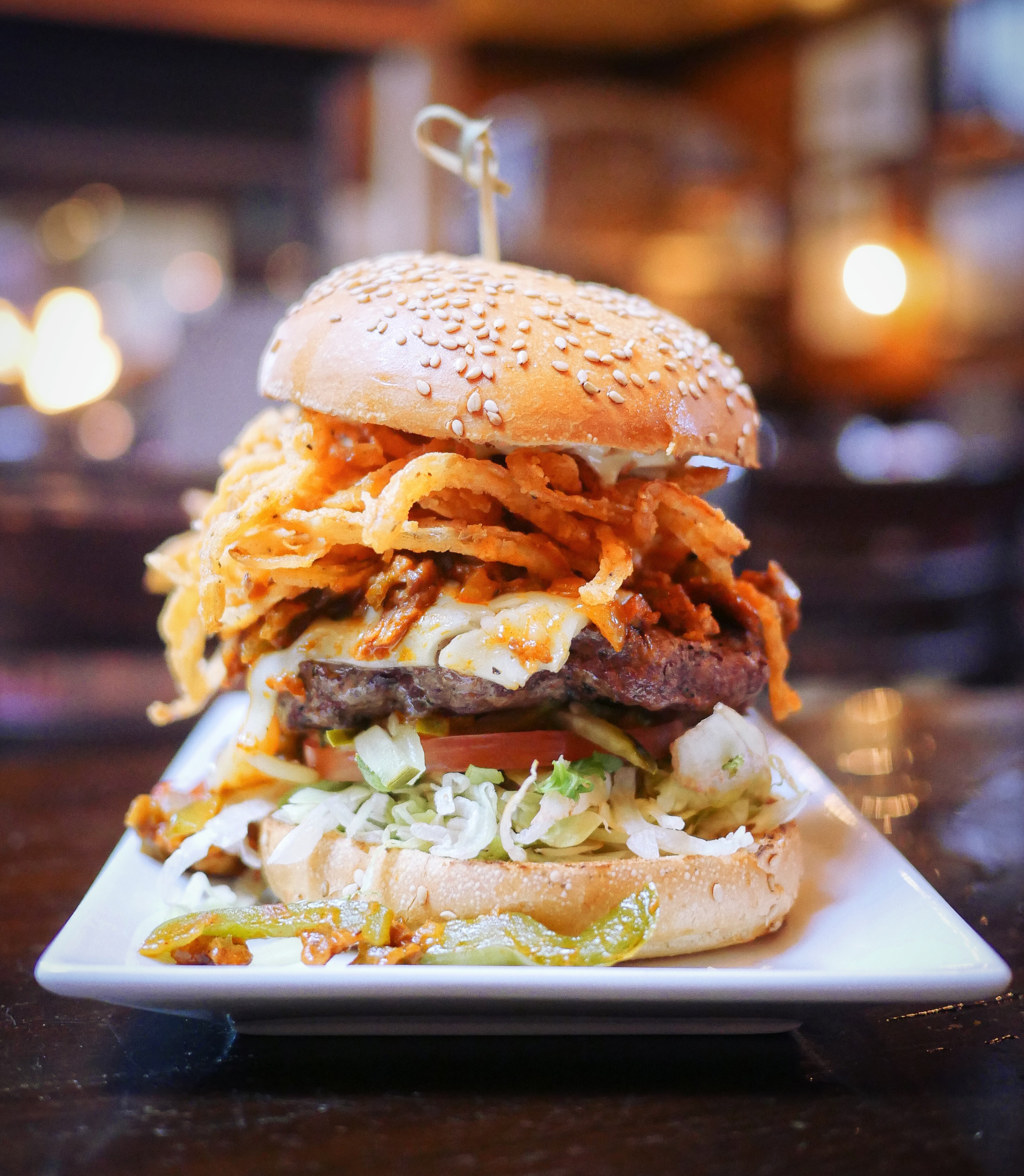 Starting with your earliest cinema memories, what was the path you followed into exhibition worlds?

My love of cinema was a childhood thing that remained throughout my academic years while studying architecture in Hobart, Australia where there was a local cinema that captivated me with its unique charm.  Back in those days [moons ago], cinemas were either family owned or operated by passionate enthusiasts rather than large corporate chains.  It was also the dawning of food experimentation to see if it would attract more audiences and that really piqued my interest since it would envelope a new set of ideas, if not trendy opportunities. Anticipating the future -- knowing we live in a world that's continually advancing, I realised early on that my future was going to be in cinema exhibition – someway, somehow.

Early history reveals food and beverages in cinemas were not a natural relationship, particularly in the USA.  Europe eventually seemed to pave the way; can you share your insights on cultural difference? 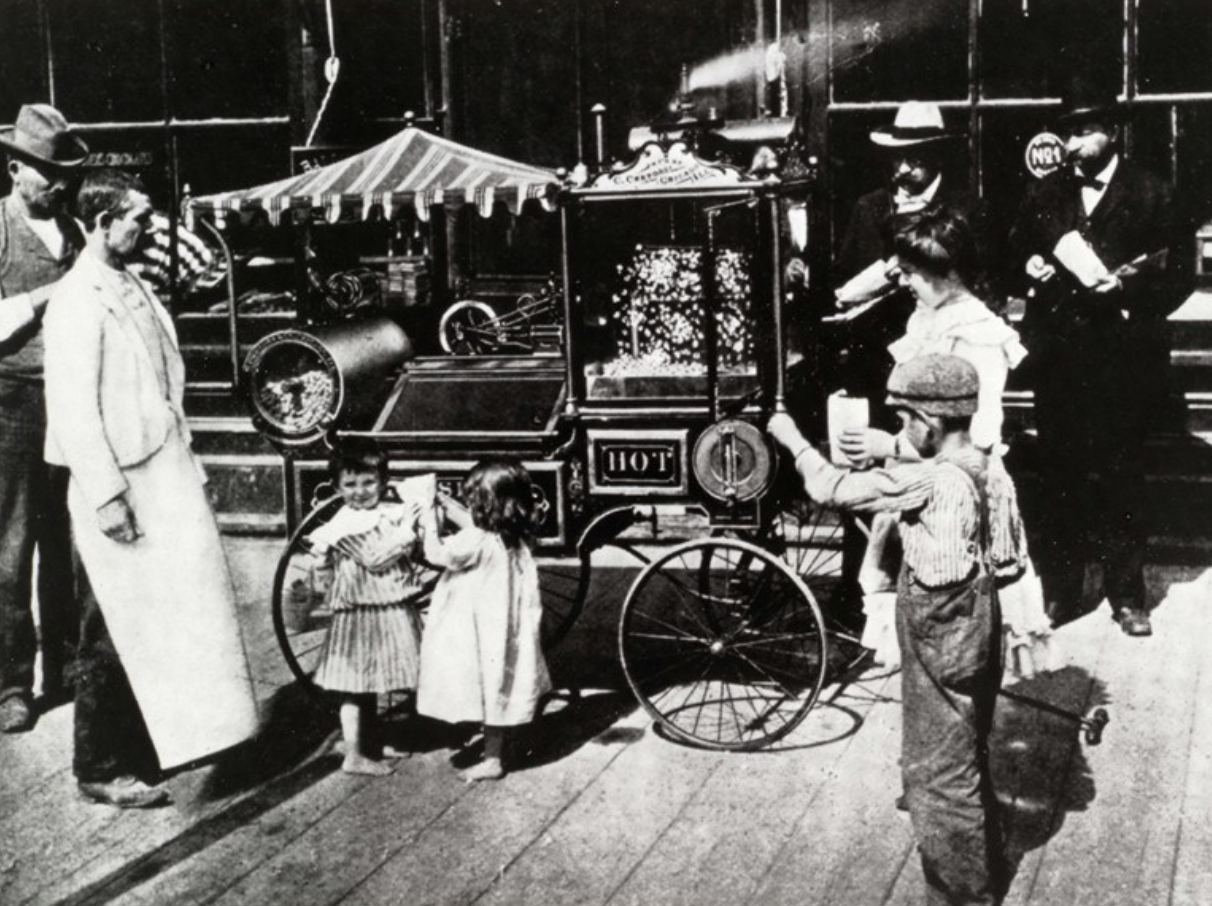 It's important to remember the 20th century endured world wars and the Great Depression nearly bankrupt American operators. The French, Germans, Italians and other European engineers were steadily advancing technologies coupled with filmmaking but with a much different mindset.  Europeans had routine social lifestyles, where bars, cafés and eateries were everyday common gatherings and a pre-show norm. So, moving inside the theatre with confectionary type offerings [initially] was easily adopted.

Silent movie houses in the early 1900's known as nickelodeons, had outside vendors provide their customer snacks, however, to keep their doors open they had to bring in food.  It began with candy dispensers, but as time progressed so did the model for the construction and installation of concession stands.  C. Cretors who began his business in Chicago, Illinois with candy and roasted peanuts, eventually invented and peddled the popcorn machine, becoming a cinema concession favorite for it's easy to store, long shelf-life and inexpensive production – still remains the top seller today.

When did you notice the cinema footprint was expanding beyond the movie and a tub of popcorn?

During the 1990's, my principle role was the Development Director for Village Cinemas Ltd. where we established cinemas in Australasia, across Asia, Europe and the Americas.  Out of those regions CGV, South Korea, and PVR, India rapidly became global leaders in stretching the 'food fare' and it was a privilege to watch their operational teams in action.

As the 21st Century approached and global cinema expansions were driven by both technologies and large-scale developments, where audience capacities would increase, I focused more on the operations of the multiplex cinemas I was involved with during that period, in particular, their best food and beverage practices.  I sensed a new movement on the horizon and it made perfect sense if cinema operators wanted to maximize the guest experience and encourage repeat visitations, whether to watch a movie or merely enjoy the amenities in a social atmosphere.

Was there a symbolic moment that stood out when you knew you wanted to be part of the food and beverage change, or the perceptions tied to it?

The Irena moment for me was when a concessions vendor at one of the industry tradeshows waxed a lyrical note about his hot dog offer – promoting it as the 'cheapest and tastiest on the market' with a 10-year shelf life.  Was alarming for a cut of meat!  My first thought was 'who on earth would claim such a thing?'

Walking around that show floor it became clear to me that Americans and Europeans were stuck in a mantra of popcorn, fizzy drinks, cheap and disgusting lukewarm food but nothing that could be really described as wholesome and chemical free.  About this time my partner, Keith Pullinger, and I set up The Light Cinemas, now ten years ago, with the intent on changing the formulae.  The proof of concept for food in cinemas was gradually being accepted, but our primary focus and difference was to deliver more environmentally sound and nutritional valued products.  There will never be a shortage of junk food in cinemas, though we believe our more health-conscious approach is being publicly responsible.

Driving this concept into the minds of operators was originally a tough sale, but now it's something to strive for and it promotes an all-around better experience for everyone.

Intuitively, you saw the future of attraction-based movie experiences – what were your key indicators?

Understanding all facets of the movie-going engagement beyond the fancy marquees, technologies and storytelling, the advantage of hospitality-driven cinemas to quench the appetite of those seeking a night on-the-town or a fun-filled daytime excursion, had quickly become a menu of options [yes, all puns intended] when seeking the best local outing.

As consultants, who often position cinemas as the anchor for expansive mall, FEC's or destination sites – we had to study and research all the amenities and components for more luxury type experiences.  Sensibly, we knew there was an emergent market taking hold and with the rise of the device era, digital deployment, automation and consumerism as a whole – cinema was progressing at light-speed [okay another pun]!

Add in seating companies like Ferco, who were beginning to see the value in 'home like' settings, we suddenly saw seating's transformation, everything from oversized recliners to full on beds factored into auditorium design.  Add in concierge and personalized services – that not only set the bar it had risen 10-fold.  The promotional domino effect was introducing the era of cinemas branding and trademarks as local attractions.  A few examples are Studio Movie Grill and Santikos Entertainment Embassy in the US-- and Event Cinemas in Australia, Fiji and New Zealand that operate under their parent company Event Hospitality and Entertainment -- very descriptive destinations. 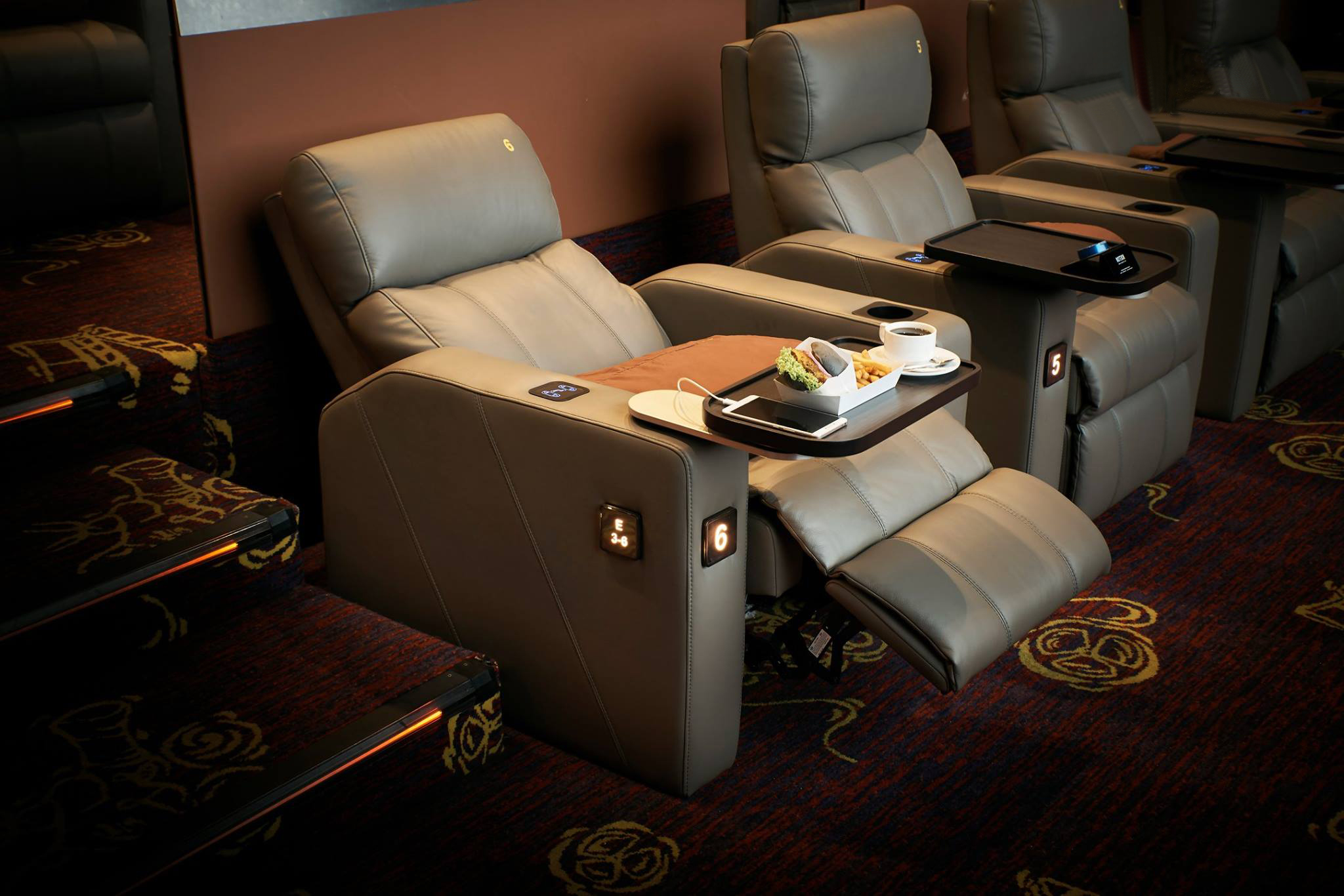 In places like London, the crossover into independent art houses and chic cinemas, which already had contemporary and retro eateries in place, we knew that our instincts were right to push the envelope for younger generations and to link their social behaviors -- they have higher expectations only knowing the current models and they're all mobile device-drive.  Besides the estimated 40% profits derived from dining, bars and specialty events – cinemas can constantly evolve their brands.

Was there ever a time when you thought the dining and events paradigm may cycle out or become yesterday's news?

Ironically, the thought of any extra entertainment amenities or trying to compete with local restaurants and bars, was just a silly notion less than 20 years ago.  Of course, that's also when a movie run was several weeks longer than today -- eventually exhibitors would have to adapt and learn new operational models.  As content creation and releases were increasing and the demands higher for audience turnover, it was inevitable that the days of concession stands and squeaky seats would be part of cinema's history, with the exception of discount theatres who cater to an entirely different audience and investment limitations.

It's an expansive subject and always difficult to wrap-up a solid interview that could last for hours with your great knowledge and positive spirit (my turn for puns).  Is there anything you want to add?

I am pleased that over the last decade, Keith, our Big Picture and Light Cinemas' teams [and many others] who joined us to create revolutionary cinemas – not only shared our vision but were dedicated to make a positive impact.  Not only for our clients and communities that we care about, but for the industry as a whole.  Many before us that pioneered the motion picture industry and weathered its change, made it possible for us to do what were passionate about.  Collaboration is the heartbeat, but the emotion you hope to invoke is the experience that leaves those indelible memories.