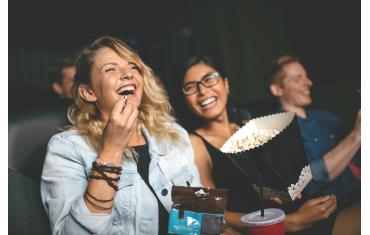 Rob Arthur has worked as a Senior Consultant at The Big Picture since 2014, having worked in the UK and International Cinema sector for 27 years with companies such as Vue Entertainment, Curzon Cinemas, Apollo Cinemas, Warner Village and Warner Bros. Recently he was appointed as an Advisor to the European Bank of Reconstruction and Development as well as co-founding the Emerging Cinema Markets Conference based in Istanbul, Turkey.

Here, he reminds us why cinema remains an important part of the community...

Residents of City Centre's across Western Europe (and across the world) put cinemas at the top or near the top of their wish list of leisure facilities they would like to have in their area.

Several countries had exceptional years! Escapism from politics, economics and the feel-good nature of the films released last year contributed to a very successful year at the box office at the UK box office.

Since the early 1980's and the rise of the multiplex, the European Cinema Industry has seen a steady period of growth particularly in Western Europe. A second phase of growth in central and Eastern Europe as well as Turkey continues at a pace.

As the largest of the Western European markets mature there are different stories to be told...France and the U.K. continue to be robust markets with a strong concentration of local content, as well as Hollywood.

The German, Italian and Spanish markets have declined significantly from their peaks and are now back to levels of ticket sales last seeing in the mid-nineties: 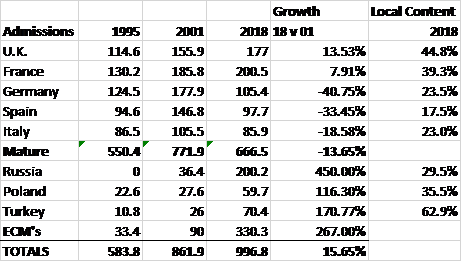 The growth of cinema in Russia, Poland, Turkey and other Emerging Markets in eastern and Central Europe has masked an under-lying issue which needs to be addressed by the under-performing markets.

Many argue that the issue is a lack of investment in cinema interiors including seats; high ticket prices; lack of use of new technology; or the lack of customer insights. Others, that there is a lack of local content. All are most likely true, but the key under-lying issue is that customers, property investors, operators and distributors have a responsibility to best understand the market-place and evolve to meet customer requirements.

Operators and distributors need to maintain the confidence of all stakeholders and as cinemas are leased over a long period of 20 – 25 years to ensure that the Property Managers believe in cinema over the long-term. While that is the case in the UK and France, they do not have the same confidence in Spain and Germany!

While we should celebrate successes such as the UK, Netherlands, France, Russia, Poland and Turkey, we should also spotlight areas where there needs to be an improvement or turnaround in fortunes.

Why are cinemas so important to the Cities, Towns and Rural Communities they serve?

In Summary, a cinema venue in the City or Town Centre should:

Be Open for Business every day and programme films at times that are convenient to all parts of the community.

Be the place to meet for a film, live event, coffee or meal.

Provide a flexible, affordable and transparent box office and on-line booking service so that all parts of the community can access the venue.

Be a high quality venue which is continually refreshed, updated and adds vitality to the area.

Create local jobs directly and in-directly (local restaurants and shops) which will have an economic impact all year round. About The Big Picture

The Big Picture (formerly CinemaNext Consulting) is the foremost, specialist international management consultancy focused on the cinema industry, based in London.

TBP is an international management consultancy and services business, specialising in Cinema Exhibition and the wider leisure market.