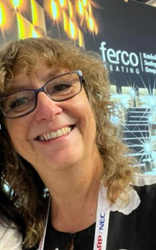 The cinema industry is quite often described as one that people “fall into”, instead of being an intentional career destination. But it’s also one that provides such a warm welcome and is full of so many exciting opportunities that once part of it many never want to leave. One such example of this is Ferco’s Brand Ambassador, Sandie Caffelle. An industry veteran, Caffelle tells us a bit about her career so far and how she became part of the Ferco family…

1) Tell us a bit about your background and how you got into the cinema industry?

I landed in the cinema industry purely by accident. I was working as a PA to a sales director at a company that imported hardwood. Late one evening, I had some important letters to finish and the sales office printer would not work - it was well past its peak and was very temperamental. The only way I could finish the job was to use the new printer in the accounts department. But when I asked them for a new printer, they said there was no budget left; I went home fuming.

When I arrived home, my mother-in-law had left a copy of the local paper on the kitchen table.  There, staring at me, was a job advert for a secretary / sales administrator for a cinema supplies company which was not too far from home. I scribbled out a letter (to this day I’ve never had a CV), drove it to the address on the advert and the next day was contacted to attend an interview. Life has a habit of working out for the best and, luckily for me, the person they offered the job to initially had found employment elsewhere and so I was offered the position!

Initially, my job was answering the phone, processing orders, writing cheques and general administration. However, I was always willing to roll my sleeves up and do whatever was necessary. This sometimes included packing up urgent orders and getting them to customers.  More than once I have driven a xenon lamp (or something just as critical) to the train station and “Red Star”-ed it to a projectionist who was waiting anxiously at the other end of the line. The job evolved into production planning, project management, organising events such as trade shows all over the world and of course, sales. In time I was promoted to head of sales, followed by global sales manager.

2) What would you say is your specialism or strength in the roles you've had?

Sales and networking have always been my strength - mainly because I am extremely interested in people. It’s always people first and business second for me. Your product has to be first class and we all need to eat, but nobody will buy from somebody they do not trust or respect. They need to know that if they have an issue, they can pick up the phone and know that they are speaking to a person who knows what the problem is, how to fix it and get the job done, without having to chase. I am very proud of my track record as far as customer service is concerned.

In my sales capacity I have attended countless industry events including UKCA and Event Cinema meetings around the UK, CineEurope, CinemaCon, CineAsia, KinoExpo (Russia), AIMC (Australia) and ECM (Turkey). In addition, I have been very involved in the BKSTS (now Cinema Technology Community / CTC) training days for over 20 years on a voluntary basis. I currently serve on the board of governors for the CTC. It’s a huge privilege. I am also on the Women in Exhibition (WIE) International Executive Committee. This group of ladies is an organisation to watch, growing stronger by the day.

3) What's the highlight of your career so far?

This might sound like a slightly unconventional answer but when I was made redundant during lockdown I was completely overwhelmed by the love and support given to me by the industry. I was inundated with job offers, offers of help and advice - it seemed that the whole world had my back. As often happens in life, it takes adverse conditions to really show a person what they are made of and what they are capable of doing. As my grandmother always said, every cloud has a silver lining.

Without the pandemic happening, I would still be on the same hamster wheel and would not have joined Ferco Seating Ltd - a truly wonderful company with an amazing bunch of people (and excellent seats of course!).

4) What would your dream career be?

I’m not sure I’ve ever really thought about what my dream career would be if I didn’t work in exhibition. I have always been a gigging musician and when I was much younger, I played with some amazing world-class musicians, but I knew I would never be a full-time professional. One person who gave me lots of advice over many years was Kathy Stobart (who played for Humphrey Lyttelton and also ran her own band when women saxophone players were rare).   She taught me that the best people give back the most. This is true of any profession.

The only other thing that I would like to have done is to become a marine biologist. When I was 50, I took up open water diving and wished I had done it years before. Wouldn’t it be wonderful to be paid to go diving and count all the creatures that live in the oceans?

5) What would you like to see change in the industry?

I would like to see more information reaching people who don’t go to the cinema. “Popcorn is too expensive, drinks are too expensive” are common statements. People need to be made more aware of, for example, how much a standard projector costs and how much it costs to equip the excellent auditorium provided for them. The average person has absolutely no idea that a huge percentage of their ticket price goes to the film distributor. This in itself is not wrong, but the public should know how much the cinema operator gets in their pocket once the ticket has been sold. Folks know that they can buy a bottle of wine in a shop and pay the same price for a glass in a pub, but this is accepted. They know, too, that they can eat at home for several days with what a restaurant meal costs and again, they don’t mind. Exhibition must educate the public more effectively, so the cost of the whole cinema experience is appreciated in a similar way.

6) What excites you about the future of cinema and where the industry is heading?

Cinema is changing, there is no doubt. As is well documented, it needs to change and reinvent itself - as it has always done. Smaller rooms, more diverse content, multi-use venues. All this will come, I’m sure. It’s already starting and whatever happens, I know it will survive. Long live cinema.