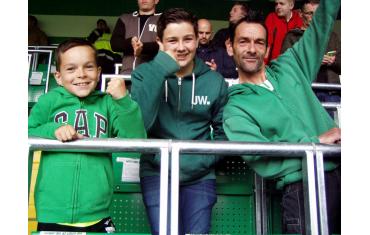 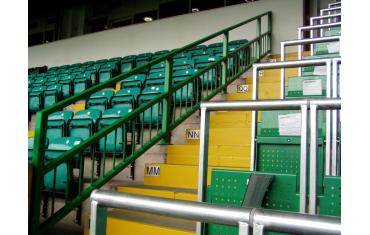 The installation of 2,900 RailSeats in the north-east corner of Celtic Park represented an historic moment in safe standing being brought to the top-tier of British football.

Although widely used in Germany's Bundesliga this is the first time a UK club has received local council permission for a safe standing area. Developed in response to fans' demands for a return to standing sections, the RailSeat takes its design from barrier technology with its robust seat and high back forming a strong and continuous handrail to facilitate safe standing. The option to revert to standard seating when regulations require also gives clubs a great deal of flexibility.

It's been an impressive season for Celtic ever since the installation with the team now unbeaten in 43 domestic football matches since the start of the season. Additionally, Celtic have achieved a clean sweep at the PFA Scotland awards with Brendan Rodgers awarded Manager of the Year, Scott Sinclair and Kieran Tierney scooping the Player and Young Player awards respectively, and Moussa Dembele presented with the Goal of the Season award.

While the team clearly takes the credit for these achievements, the response to the safe standing area and the atmosphere it helps to create has been almost unanimously positive.

Celtic Chief Executive Peter Lawwell has previously said "We feel there is a new vibrancy in football that has come from Europe and is now in the UK. It's an energy and youthfulness and the safest way of embracing and managing this is with safe standing." Fans have been quick to praise the system too, with RailSeats providing a safe method of creating an incredible atmosphere within the stadium.

Safe Standing has been an excellent business decision for the club as well, with all season tickets sold well in advance in this area, plus a waiting list of almost 3,000 fans. The introduction of the RailSeat has also been attributed to creating a mood of excitement around the club that saw total season ticket sales exceed previous years by around 10,000.

Celtic FC are proud to be at the forefront of bringing safe standing options to football in the UK &endash; and Ferco Seating are proud to have partnered with them on this project. We're looking forward to fresh opportunities in this area following interest from several top-flight clubs, and we also wish the team all the best in completing their unbeaten domestic season.

What is safe standing? (Wiki) >