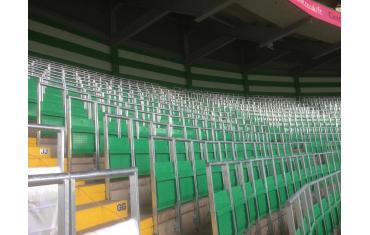 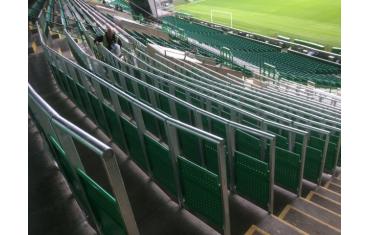 Shrewsbury Town Football Club have officially announced their bid to become the first English side to install safe seating.  This supporter-led initiative would see a section behind the goal in the South Stand replaced with Ferco's dual-use seats. By allowing seats to be locked away with a secure rail in-between rows, fans remain in complete safety while standing to generate an incredible atmosphere.

The safe standing plan is a great example of a club listening to their fans after the Shrewsbury Town Supporters' Parliament approached them with the initial proposal. As a locally-based company Ferco Seating have been closely involved in discussions to install the rail seats, and are proud to be associated with what will be a pioneering scheme.

For Ferco this will be their second significant safe standing project following on from Celtic FC who installed 2,900 seats last year. This has been roundly praised as a great success with safe standing credited with improving the atmosphere, encouraging fans singing, and keeping a safe environment at the same time.

In the last week Celtic have been awarded The Stadium Business Fan Experience Award in recognition of their safe standing section of the ground. Celtic General Manager Robin Buchanan also received the Outstanding Achievement Award for his commitment to fans at the Scottish club. In the judges decision they noted that 'His efforts have demonstrated that safe standing – if planned and implemented properly – can be implemented safely and can improve the matchday experience of all fans'

Shrewsbury Town are keen to capitalise on the enhanced fan experience seen at Celtic, while ensuring their supporters are kept safe inside the ground. Brian Caldwell, Shrewsbury Town's chief executive told BBC Sport 'Our safety officer has been up to Celtic to see it in action and was very, very pleased with how safe and secure it was.'

An application for a license is currently with Shropshire Council's safety advisory group which will then need to be forwarded to the national Sports Ground Safety Authority for approval. In anticipation of this the club have started a crowdfunding campaign and are inviting donations from fans to raise the cash for between 400 and 500 dual-use seats.

In being the first English club to apply for safe seating, the process will be closely watched by other clubs who have expressed an interest in similar projects. The success of Celtic FC in this most recent season suggests that safe seating can be a huge boost to fans and their team – and Ferco are looking forward to moving forward with the project in due course.